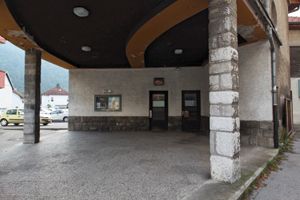 The site of the present day cinema was originally occupied by a barn and a stable. In 1935 Mr. and Mrs. Poje bought the land and built a cinema. However, in 1941 the hall was occupied by the Italian army. The cinema was also the site of the trial against the organizers of the anti-Communist movement from 9 to 11 October 1943. The building was bombed in 1943. It was renovated after the war and even today serves its purpose.

Posted On 13. 1. 2015 ~ 0 Comments
The Bilpa wall, which Valvasor called the wall of echoes, rises above the caves. In it the nature shaped several human, animal and mythological figures.…

Posted On 13. 1. 2015 ~ 0 Comments
It is a very popular destination with a view of the Kolpa River canyon. The Krempa natural reserve is a central point of the Borovec nature…