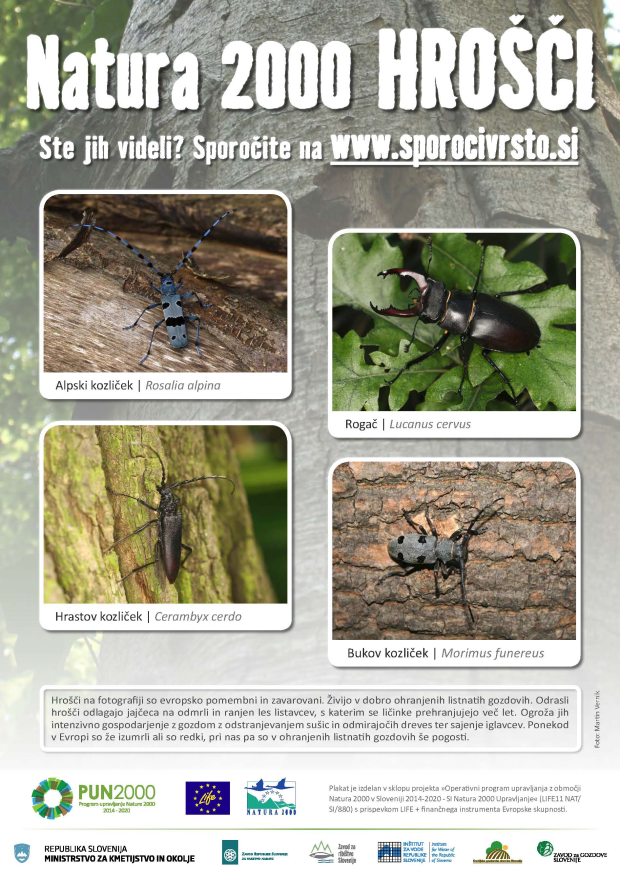 Habitat trees and decaying wood are irreplaceable habitats for numerous endangered species of birds, bats, small mammals, fungi and lichen. According to some estimates, as much as third of European forest species are inextricably linked with decaying and decayed trees within their lifecycles. Often overlooked though the most abundant animal group, the beetles are very important bio indicators of the environmental status of the woodland. Project area of Kočevsko is one of the key areas for preservation of rare and endangered beetle species in Slovenia, that being the case, we invite nature lovers to report their sightings of rare and endangered beetles, take picture and report their observations online at www.sporocivrsto.si web portal, where they will find basic instructions and descriptions of relevant species of beetles.

Posted On 26. 3. 2015
Slovenian hunters association (Lovska zveza Slovenije ) as external contractor for capercaille population recording, held a course for all interested individuals willing to participate in…

Posted On 7. 12. 2017
In January, our project team will start conducting educational workshops about endangered species in Kočevsko. Since knowledge about nature conservation is crucial especially among local…

Posted On 21. 10. 2014
At the initial meeting of partners  leading partner – municipality of Kočevje presented us with information panels with designed logos according to the Life projects…